Added 3 years ago by vindheim
224 Views
Edmunds gets an early look at the 2020 Porsche Taycan, which is this legendary brand's first electric car. It's the car we've all been waiting for since the Porsche Mission "E" development program was announced a few years ago. The Taycan (rhymes with "icon") is a high-performance sport sedan with four doors and a trunk — two, in fact, because it's got another trunk in the front. Its powerful electric motors at each end make the Taycan an all-wheel-drive machine, too.

What Porsche has said is the battery, motors and other power electronics are built around 800 volts instead of the usual 400, so the Taycan can charge very quickly. An 800-volt fast charge station can charge the battery from 5% to 80% in just 22.5 minutes at an astounding charge rate of 270 kilowatts. Those charge stations exist, too, and Electrify America is currently building out a coast-to-coast network along major highways.

About the 2020 Porsche Taycan Electric Car

The Porsche Taycan debuts as Porsche's first purpose-built electric vehicle, with a maximum estimated range somewhere between 250 and 300 miles and performance that's worthy of the Porsche crest. A four-door luxury sedan with both a trunk and a frunk, the Taycan will eventually be offered in a few different trim levels, highlighted at launch by the all-wheel-drive Turbo with an estimated starting price of $130,000.

Porsche hasn't handed anyone the keys to a fully uncamouflaged 2020 Porsche Taycan just yet. But it has finally pulled the wraps off the styling and shared numerous technical and performance details about this hotly anticipated all-electric sports car.

Two versions of this four-door electric sports car will be available at launch. And it will seat four or five depending on options that have not yet been fully described. We know for certain that the Taycan Turbo and the Taycan Turbo S both employ dual-motor all-wheel-drive systems. This Porsche is a thoroughly new electric vehicle platform that has been optimized around a sizable 93.4-kilowatt-hour battery pack under the floor and powerful permanent-magnet electric motors powering each end.

The Taycan can generate wicked acceleration from rest using first gear in Sport mode and then shift into a higher gear to deliver an autobahn-worthy 162-mph top speed. Or if you're after maximum efficiency, you can select Range mode and have it use second gear all day long.

The Turbo powertrain generates a maximum of 616 horsepower and 626 lb-ft of torque. Porsche says this amounts to 0-60 mph in 3.0 seconds and an 11.1-second quarter-mile. The Turbo S comes with a more powerful front motor, along with launch control with an overboost function. All of this raises the bar to 750 hp, 774 lb-ft of torque, 0-60 mph in 2.6 seconds and a quarter-mile time of 10.8 seconds.

The Taycan's interior manages to be both modern and familiar at the same time. The basic look is not unlike that of the newest 911, with strong horizontal lines across the dash and a well-defined center console. The similarity ends quickly when you start to notice that there aren't any real instruments and the number of screens can range up to five.

The instrument panel itself is a broad 16.8-inch curved display that can be configured to display traditional-looking instruments or a full-width map. You make changes with the steering wheel controls, and the menus are as simple and straightforward as any we've ever seen. The controls for lights and the traction control appear as clearly labeled touch-sensitive controls just outside the arc of the steering wheel at each end.

A 10.9-inch screen serves as the central infotainment interface, and it supports Apple Music without a phone at all or Apple CarPlay with an iPhone connected to a USB port. You can opt to add a second screen of about the same size in front of your front passenger. It allows your co-pilot to search for entertainment and navigation waypoint options and port them over to the main display.

Several leather themes and at least one leather-free upholstery option will be available, but we have not spent enough time sitting in any of the seats to judge their long-term comfort. They certainly are attractive, and the front seats have enough space for our taller people. Even though it looks it, the Porsche Taycan is not a hatchback. It does have front and rear trunks, but the rear seatbacks do fold to increase the available space.

Make sure to subscribe to Edmunds to get all of the latest videos on car reviews, automotive news and car comparisons: https://www.youtube.com/user/Edmundsvideo?sub_confirmation=1 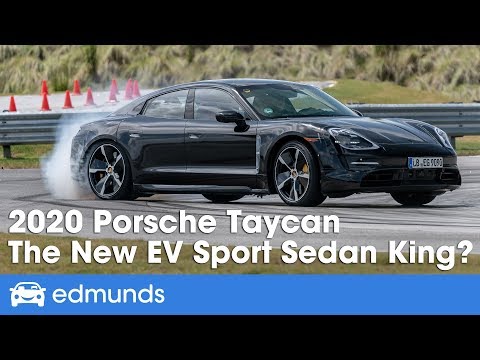 Edmunds gets an early look at the 2020 Porsche Taycan, which is this legendary brand's first electric car. It's the car we've all been waiting for sin...