The Beatles : Some Listeners Phoning In To Radio Stations To Stop Playing The Beatles Music !!!

Added 2 months ago by vindheim
14 Views
Before John, Paul, George and Ringo became the Beatles, they were simply four teenagers from Liverpool. Never could John Lennon, Paul McCartney, George Harrison and Ringo Starr have imagined they would go on to form one of the most successful groups in modern history, influencing the popular culture in not only music, but also fashion, film and global representation. In the late 1950s and early 1960s, it was difficult to imagine a band hailing from the relatively poor northwest port city of Liverpool, England, could get a gig in the thriving London music scene of the south, let alone export their eventual homegrown success to a world eagerly opening up to the counter culture movement of the 60s and the burgeoning phenomenon that was called rock N roll. A fateful meeting between two music-loving teenagers in 1957 is where it all began. Sixteen year old rhythm guitarist Lennon, the son of a merchant seaman was performing with the Quarrymen, a skiffle folk music blended with jazz or blues band booked to perform at events at a church fete in Woolton Liverpool. While setting up their instruments for the evening performance, the band’s bass player introduced Lennon to a classmate, 15 year old McCartney who would join in on a couple of numbers that night and soon would be offered a permanent spot in the Quarrymen. Harrison the son of a bus conductor and shop assistant joined the Quarrymen as lead guitarist at age 15. Influenced by rockabilly, his guitar licks would help shape the group’s early sound. Though still performing as the Quarrymen, Lennon, McCartney and Harrison would go on to form the core that would soon become the Beatles. Throughout 1958 and 1959 the Quarrymen gigged whenever they could, including local parties and family events such as the reception for Harrison’s brother’s wedding. Professional bookings included venues such as the Casbah Coffee Club in Liverpool and Hippodrome in Manchester. The name of the band was in flux during this period, which would witness the group play under monikers Johnny and the Moon Dogs as well as The Silver Beetles and The Silver Beats. An art school student and friend of Lennon’s Stuart Sutcliffe, was brought into the band to play bass. Sutcliffe and Lennon are often credited with coining the name the Beatles, though various stories abound on the actual origins. The name that would become synonymous with modern music was a combination of beetles and beat hence the Beatles. In 1960 and the first half of 1961, the group performed at venues including social clubs and dance halls around England and Scotland, but keeping a regular drummer was proving to be difficult. On short notice, they recruited Pete Best, whom they had seen play at Casbah Coffee Club. Lennon, Harrison, McCartney, Sutcliffe and Best left England in August 1960.
LIKE, SHARE & SUBSCRIBE if you enjoyed the video please!

All materials featured in the video are owned by their respected owners. We do not claim their videos as our own.

All videos/photos/used in the explanation are for visualization purposes only.
#thebeatles #johnlennon #paulmccartney #georgeharrison #ringostarr

The Beatles : Some Listeners Phoning In To Radio Stations To Stop Playing The Beatles Music !!! 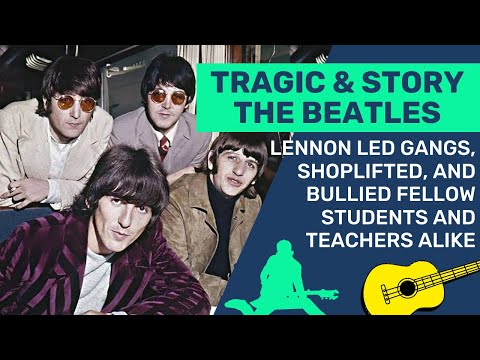 Before John, Paul, George and Ringo became the Beatles, they were simply four teenagers from Liverpool. Never could John Lennon, Paul McCartney, Georg...