Added 3 years ago by vindheim
222 Views
During the Industry Pool at the Nürburgring I have filmed the 2019 Porsche Taycan testing on track.

Porsche’s Taycan, the all-electric 4-door, will be here in 2019 and followed into showrooms by an electric SUV
The all-electric Porsche Taycan won’t be hitting UK roads until 2020 after a reveal in the later stages of 2019.

These vehicles go on to join the intensive test programme ahead of the car’s official debut, which is expected to be at next year’s Frankfurt Motor Show. Sales are yet to officially begin but Porsche claims to have received upwards of 10,000 requests from potential Taycan customers.

Our first clear glimpse at the undisguised cars reveals a design that remains true to the original Mission E concept, save for modifications to satisfy typical production requirements.

The four-door saloon format is described as a ‘four plus one’ with space for luggage front and rear, while the driving position is “almost identical to the 911”, according to Robert Meier, Director Complete Vehicle Model Line Taycan.

In the cabin, directly ahead of the driver, is a freestanding curved digital instrument display as seen in the original concept. To the right is a small toggle-style gear selector for Drive, Neutral and Reverse. A large infotainment screen, resembling the 10.1-inch unit used by Audi, sits flush within the vertical gloss finished panel that stretches across the fascia.

A second touchscreen sits in a sloped centre console separating the front seats, making the cabin almost devoid of physical buttons. In the back, a recessed foot well has been made possible by Porsche doing away with battery cells in this area to create what it calls a ‘foot garage’.

Porsche’s engineers remain tight-lipped on exact driving range and battery size, but tell us to expect upwards of 310 miles on a single charge; fast charging at up to 350kW could add 180 miles of range in nine minutes. Inductive charging is also in development, but won’t be available at launch.

Buyers may be able to buy temporary or permanent upgrades via over-the-air updates, similar to Tesla. More power and different chassis setups are all possibilities according to Lutz Meschke, Deputy Chairman for Finance and IT at Porsche.

Initially, the yearly Taycan production output will be between 20,000 and 25,000 units. “We are capable of ramping up our production capacity substantially if demand exceeds expectations,” said Meschke.“We will be able to ship significant numbers in the coming years,” he added.

According to Porsche, Taycan is a word taken from an eastern dialect and is pronounced ‘tie-can’. It translates as ‘lively young horse’ and is a reference to the horse that’s been rearing up on its hind legs on the Porsche badge since 1952.

Porsche is revealing little about the exact specifications of the Taycan powertrain but we understand the car will develop over 600bhp via a lithium-ion battery pack denser than anything Tesla currently offers, rated at 270 watt-hours per kilogram. Two permanently excited synchronous electric motors (PSM), one on each axle, will provide drive. The PSM motors are derived from Porsche's Le Mans winning 919 LMP1 car, the marque claiming that the key advantage offered by PSM is compact packaging and weight saving.

Porsche claims this powertrain will allow the Taycan production car to cover 0-62mph in under 3.5 seconds and 0-124mph in under 12s before hitting a top speed of 155mph. Crucially, we’re told the performance will be repeatable with the electric car able to accelerate hard ‘over and over again without losing performance’.

The target is for the Porsche Taycan cover upwards of 310 miles on a single charge and Porsche says the 800-volt system can take on 62 miles of charge in just 4 minutes, or almost 250 miles in 15 minutes. Of course, these figures are entirely dependent on the availability of 350kW CCS chargers compatible with Porsche's 800v system. At present, the IONTY network is expanding across Europe and building chargers capable of delivering such voltages, and Porsche has plans to deploy 500 of its own chargers across the United States in the coming years.

This version of the Taycan is expected to be the flagship model but Porsche has invested a further 500million Euros (£437million) to develop additional versions of the car. The variants, of which there is likely to be three, will vary from around 400bhp up to 600bhp. Porsche CEO Oliver Blume told us: “We will think of different options and there will be more than one, with different levels of power.”

Thanks for wachting! More videos are coming up. 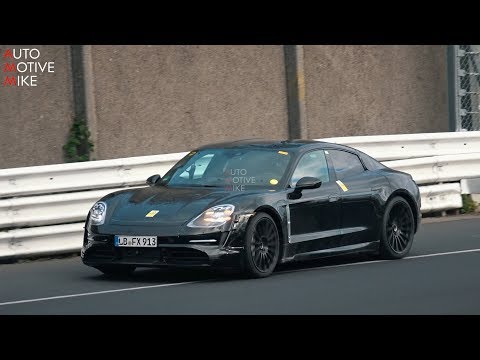 During the Industry Pool at the Nürburgring I have filmed the 2019 Porsche Taycan testing on track. Porsche’s Taycan, the all-electric 4-door, will be...